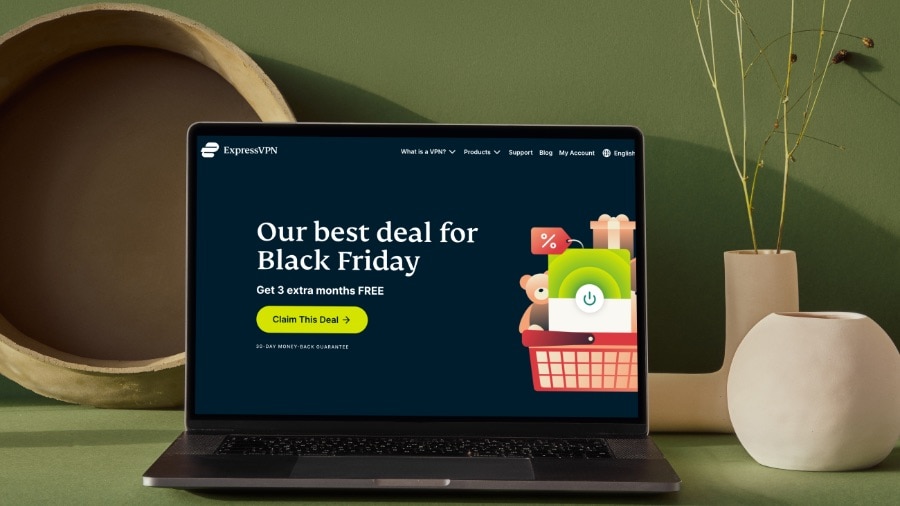 Regular FireStickTricks.com readers must be aware of the importance of using a VPN. If you have been eyeing to board the VPN train, now is the right time, as most VPN providers have already launched their Black Friday VPN deals early for interested users.

Some VPN companies are offering discounted prices, while some are luring consumers with a few extra months free. There’s no cheaper way to add an extra layer of security to your online browsing.

Tip: The VPNs listed on this page work smoothly for all the devices and streaming services. Feel free to pick any without worrying about the type of device you own.

Why Do You Need to Invest in a VPN?

Most users invest in a VPN to protect their online identity. While that’s one of the main reasons to get a VPN, it comes with other advantages as well.

For instance, you can change your location and access apps and services that aren’t available in your region. Many popular apps and services aren’t accessible outside the US. A VPN connection removes such restrictions.

A secure and reliable VPN connection also opens up floodgates for third-party streaming apps and IPTV services on your streaming device. Since your online browsing is kept private from your government and ISP provider while on a VPN, you won’t have any issues streaming unverified content.

Now that you know why using a VPN is important, browse through the best VPN Black Friday deals for 2022 and pick one based on your requirements and budget.

I will start the list with my personal favorite – ExpressVPN. 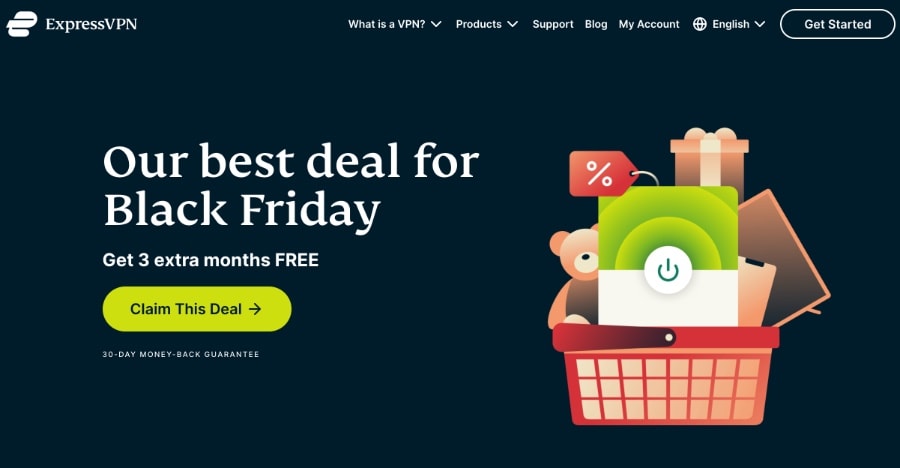 ExpressVPN offers a money-back guarantee. If you are not satisfied with the service, you can claim a 100% refund within 30 days, without being asked any questions.

The pricing starts at $12.95 per month if you opt for monthly payments. But interested users should go for the 15-month plan that includes 3 free months and brings the price down to $6.67 per month. You also get 1 year of free unlimited cloud backup from Backblaze.

Whatever plan you choose, they all come with a 30-day money-back guarantee. This is easily one of the best Black Friday VPN deals out there. 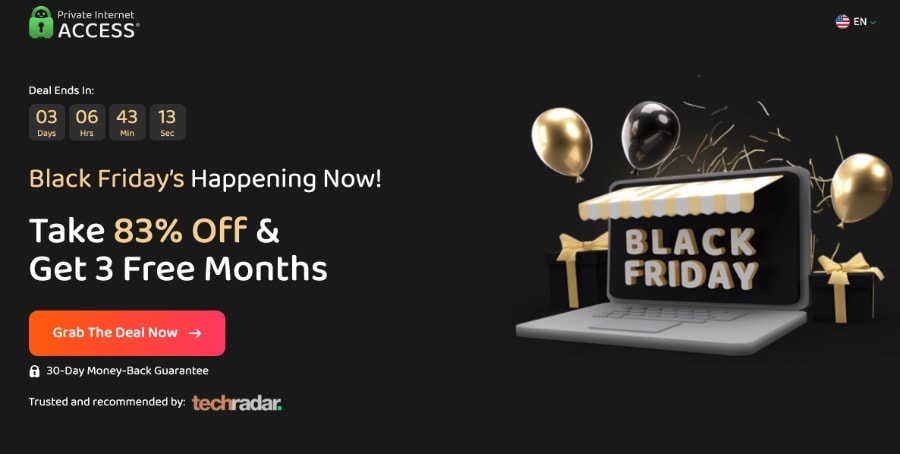 Private Internet Access (often known as PIA) has one of the cheapest Black Friday VPN deals. You are looking at paying $2.03 per month for 36 months, totaling $79 for 3 years.

After the Black Friday deal period is over, the price will increase to the original amount of $466.05 for 3 years. Do keep this in mind before you renew your VPN subscription.

Private Internet Access allows you to connect to 10 devices simultaneously. The company also offers dedicated apps for all major operating systems. If you are looking to get the most affordable Black Friday VPN deal, it doesn’t get better than Private Internet Access. Grab the deal at the link below. 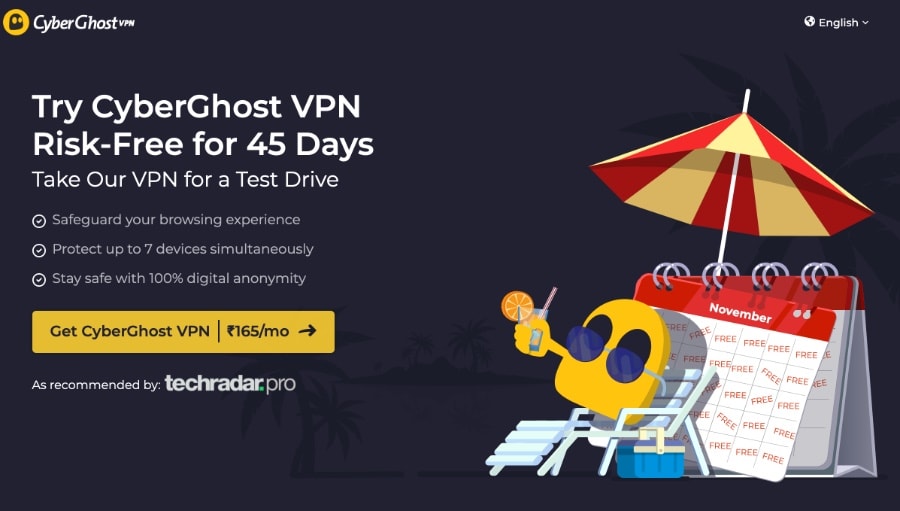 As a part of the Black Friday VPN deal, CyberGhost is offering a jaw-dropping 83% savings on their most popular plan. Not only do you get 3 months free on top of the 2-year plan, but you also get handsome savings on the total bill.

The whole deal will cost you only $58.5 for 27 months, bringing the total to $2.17 per month. Interested subscribers can also add a dedicated IP to their VPN and a dedicated password manager from the company. 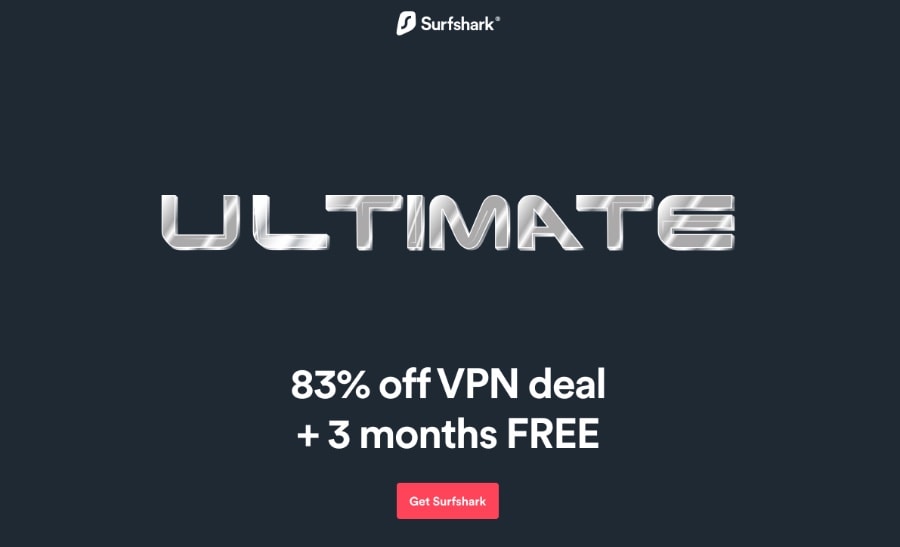 The next one on the best Black Friday VPN deals list is Surfshark. The VPN service normally costs $59.76 per year. As a Black Friday deal, Surfshark is offering a generous 27 months (24 months + 3 months free) for the same price.

Total, you are looking at paying only $2.21 per month. Following the same route as others, Surfshark is advertising a 100% money-back guarantee for your first 30 days.

To stand out from the VPN crowd, Surfshark has added goodies such as support for unlimited simultaneous devices, a native ad blocker, and 2FA (two-factor authentication) support for all paid users. 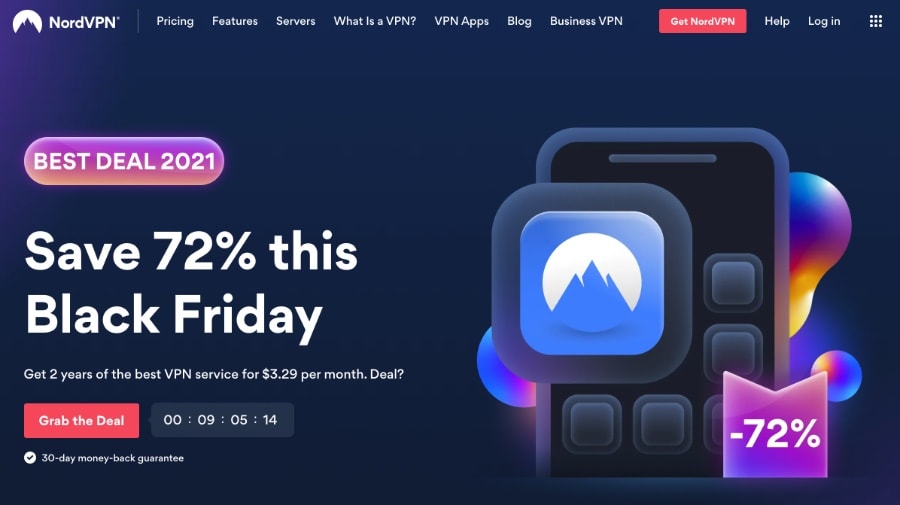 You can’t rule out Nord VPN from the best Black Friday VPN deals, can you? NordVPN, a well-known service in the VPN industry, has announced a 72% discount on its most popular plan.

NordVPN’s Black Friday deal will set you back by $79 for the first 2 years. The deal usually costs $289.80 for the same period. That’s a healthy discount you are getting for 24 months.

One thing to keep in mind here is when you check out for NordVPN, do disable the NordPass Premium addon. By default, it’s added to your invoice. You are better off using a rival password manager such as 1Password or LastPass compared to NordPass Premium.

In some ways, the VPN world works similarly to web hosting. Most VPN companies advertise a per-month price, but when you try to subscribe at that price, you may be paying for 24 or 36 months at a time.

Also, don’t forget to check the full price after any promotional periods. For example, some VPN companies will lure you with a $2-per-month price tag, and after the Black Friday deal period is over, you will be looking at paying four times more, around $8 per month. I advise you to add a reminder before the due date of a pricier bill. Simply check the original price and then decide whether to continue with your subscription.

Besides, VPN companies don’t wait for Black Friday to offer the best deals. Throughout the year, they offer different discounts and deals. After the Black Friday deal is over, you can always move to another VPN service on the list.

Don’t get confused with so many options. Let me simplify them for you. If you are looking to get a no-nonsense fully packed VPN deal, go with ExpressVPN. It might be pricey but it gets the job done and never lets you down.

NordVPN has of the biggest networks with 5,400 servers. However, it fails to unblock the US Netflix library. If that’s a deal-breaker for you, then move your attention to other deals. Surfshark beats the competition with a good number of features while remaining slim on the price. Private Internet Access is the cheapest of the bunch.

Which Black Friday VPN deal have you pinned down? Share your pick in the comments below.