You are here: Home / Sports Streaming / How to Watch Gervonta Davis vs Isaac Cruz on FireStick Without Cable

In this post, I will explain how to watch Gervonta Davis vs Isaac Cruz fight on FireStick without cable. The streaming methods covered in this article also apply to iPhone, Android, Android TV, Apple TV, and other smart devices. I will share both the paid and free tricks. Make sure to stick around till the end to learn every trick. 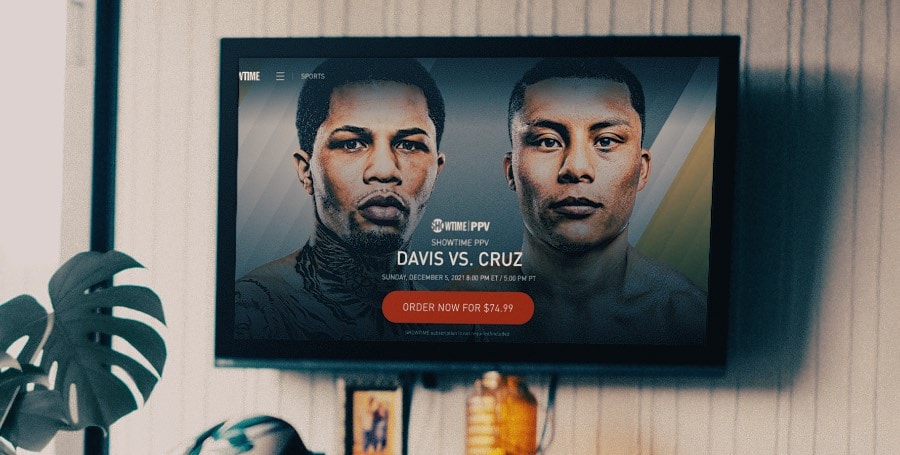 After Rolando Romero’s last-minute pullout from a fight against Davis, Isaac Cruz agreed to step up and now the Mexican is all set to go toe-to-toe with Gervonta ‘Tank’ Davis in a PPV fight this Sunday night. Schedule to go live in California, you can easily watch the entire Davis vs Cruz fight card at home on FireStick without cable.

What Happened to the Davis vs Romero Fight?

As you probably know, Ronaldo “Rolly” Romero was supposed to rival Davis in the lightweight fight. Last month, a woman accused Romero of sexual assault in a post on Twitter and filed a police report.

Later, Romero came out with a statement dismissing such claims and agreed to step down from the upcoming PPV fight against Davis. He vows to return to the ring as soon as possible after clearing his name.

Isaac Cruz agreed to step in for Romero, and now the 23-years old Mexican fighter aims to deliver Davis his first loss in his professional career.

Gervonta “Tank” Davis hasn’t lost a single fight in his career. Out of his 25 fights, he has come out as a winner in 24 bouts. Davis was last seen in June when he defeated Mario Barrios. He will be looking to deliver yet another winning performance this Sunday night.

Isaac Cruz, often known as Pitbull, has remained undefeated for over five years. He has excellent wins over the likes of Francisco Vargas and Diego Magdaleno. Will he be able to withstand the punching power of Davis? Only time will tell. Meanwhile, let’s look at the fight details.

Davis vs Cruz fight is scheduled for this Sunday, December 5. The main bout will start at 8 p.m. ET or 1 a.m. GMT. The main event should start at around 11 p.m. ET, depending upon earlier fights.

The official venue for the event is Staples Center in Los Angeles, California.

How to Watch Gervonta Davis vs Isaac Cruz Fight on FireStick

Showtime is showing the fight in the US as a part of the PPV (pay-per-view) event. You can either purchase the fight from the local cable operator or buy the PPV event from the web.

Subscribing to the Showtime channel on FireStick via one of the streaming services won’t do the job for you. It’s a PPV event, so you will have to pay additional to watch the fight.

Elsewhere, FITE TV carries the license to air Davis vs Cruz fight. Both Showtime and FITE TV are available from the Amazon App Store and the app stores of other popular operating systems.

Watch Davis vs Cruz Fight in the US 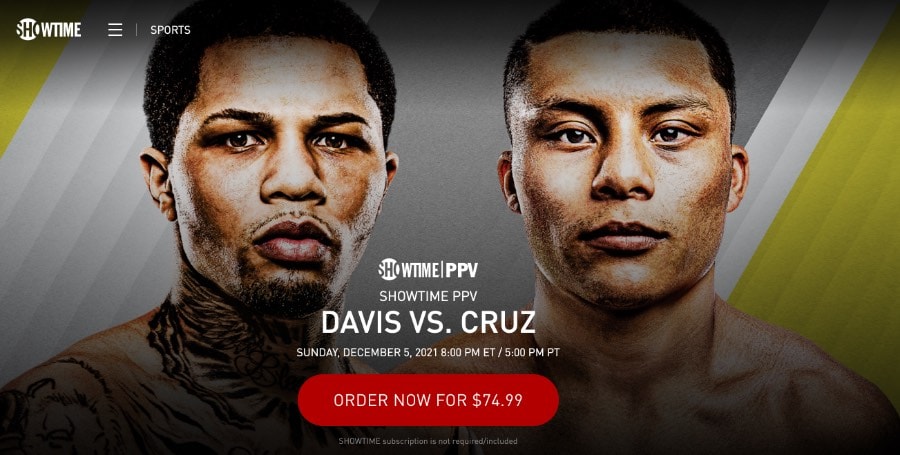 Showtime is the official partner to host and stream the Davis vs Cruz fight in the US. Showtime has priced the fight at $74.99. Don’t worry though, I will show you a cheaper way later in the guide.

First, you need to download the Showtime app on FireStick. The subscription costs $10.99 per month and offers a rich library including blockbuster shows such as Billions and Shameless.

Head to Showtime’s official website and purchase the event for $74.99. After a successful transaction, the event will appear under your account in the Showtime app.

Watch Davis vs Cruz Fight in the UK

FITE TV gets to stream the Davis vs Cruz fight in the region. The event will start late at night though. Be prepared to pull an all-nighter to watch the entire fight.

FITE TV has priced the PPV event reasonably in the UK compared to Showtime’s PPV price in the US.

The fight is available for only $12.99 in the region. It’s the same case elsewhere that FITE TV has the rights to stream Davis vs Cruz fight. The company has an official app available from the Amazon App Store. You won’t have a hard time figuring out how to access FITE TV on FireStick.

Watch Davis vs Cruz for $13 from Anywhere

The Davis vs Cruz fight is much cheaper to stream in other regions compared to the US.

However, you can’t just visit FITE TV in the UK and pay for the event. You need to use a VPN service such as ExpressVPN to change your location and access geo-restricted content.

That’s not all ExpressVPN does. It provides a security shield against unofficial apps on FireStick (I will discuss that later in the post).

In the step-by-step guide below, I will demonstrate how to buy Davis vs Cruz PPV event for only $13 and view the entire fight card on FireStick without cable.

1. Sign up for ExpressVPN from the official website. Don’t worry about the price tag though. It comes with other advantages, and if you are unsatisfied with the service or no longer need it, you can ask for 100% of your money back within 30 days.

2. From the FireStick home, select the Find menu. 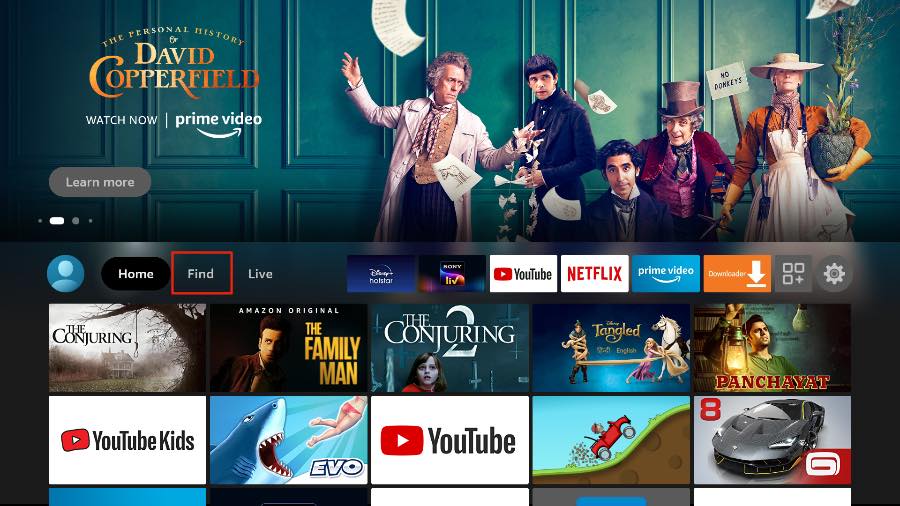 3. Go to Search and type ExpressVPN. 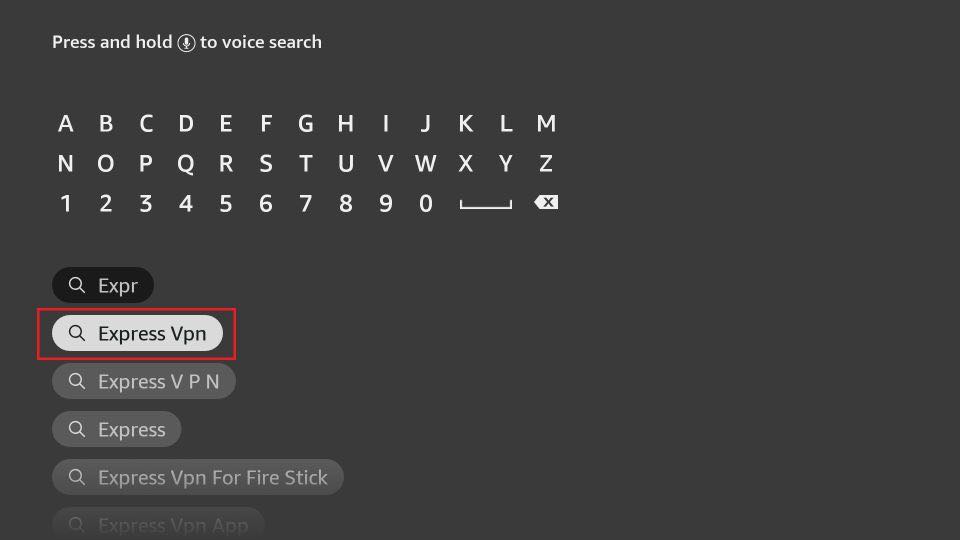 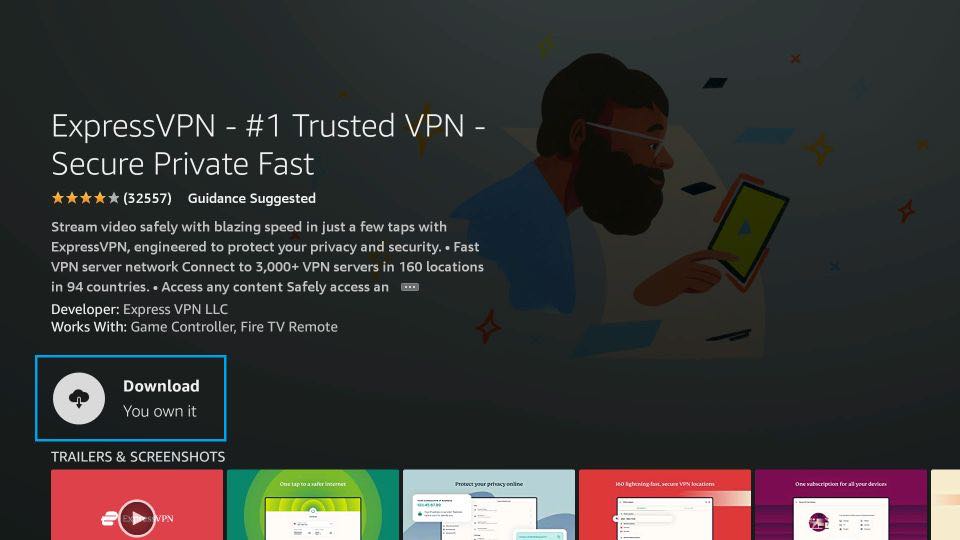 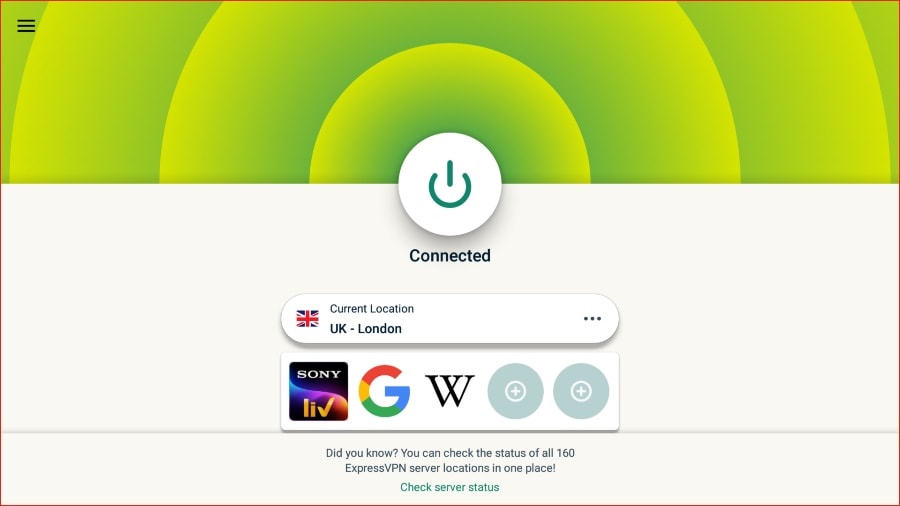 Note: If you don’t have the FITE TV app yet, search and install it the same way as the ExpressVPN app above. 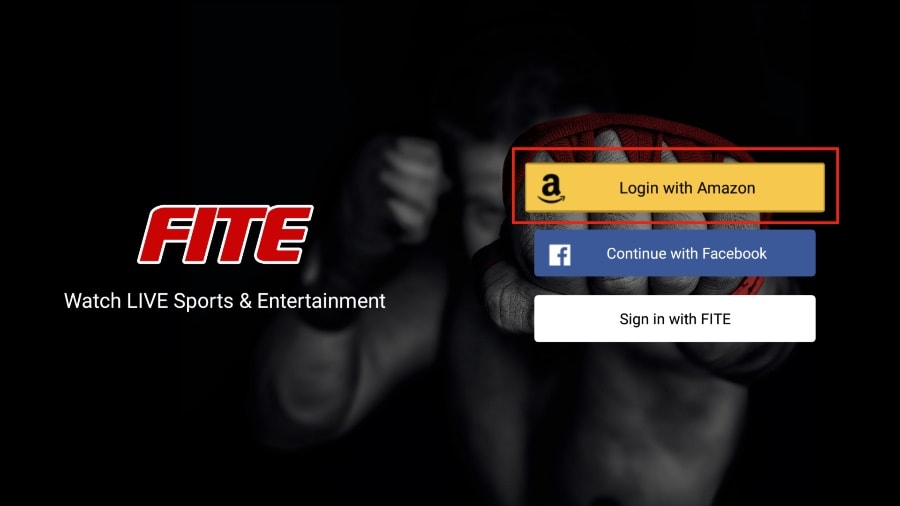 7. From the home screen, you will find Davis vs Cruz fight. 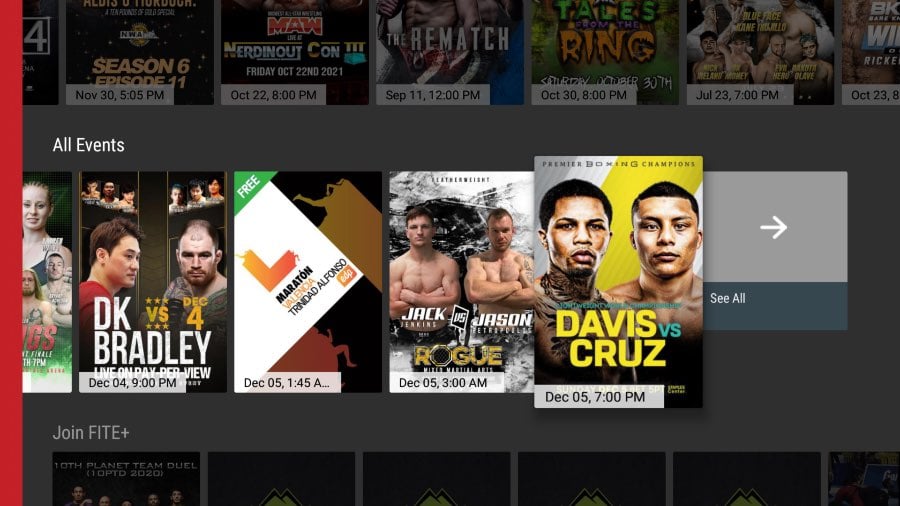 8. Open the fight card information and you will see the $12.99 price tag as shown in the screenshot below. 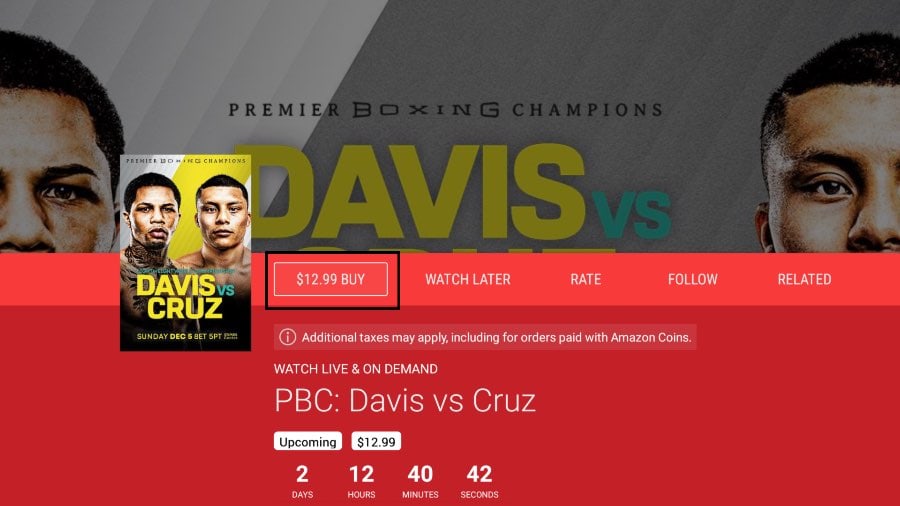 9. Pay for the fight using one of the saved cards in your Amazon account. 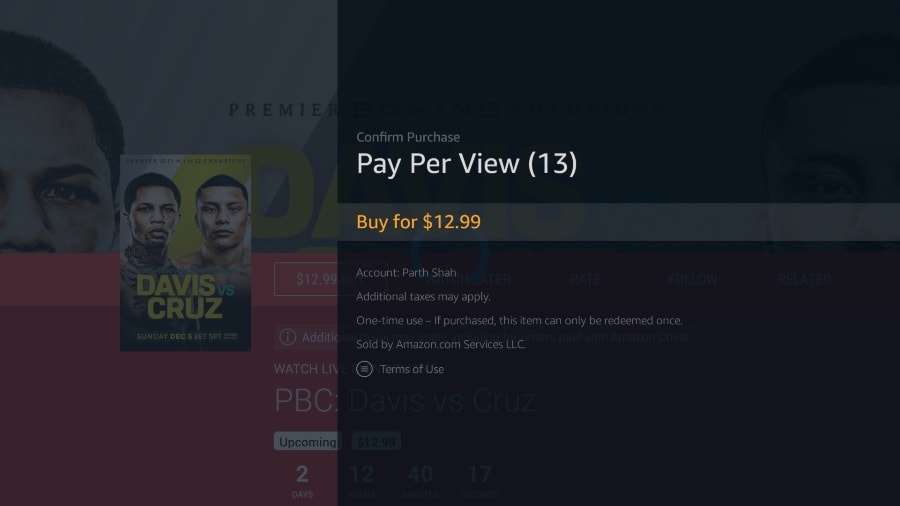 After a successful transaction, you are all set to stream Davis vs Cruz fight on FireStick without cable.

Watch Davis vs Cruz Fight on FireStick for Free

Whether you go with Showtime or FITE TV, you end up paying some amount of money. If you are looking to watch the entire Davis vs Cruz fight for free, try some unofficial methods.

Before you start exploring them, you should invest in a VPN service such as ExpressVPN to avoid unwanted legal troubles in the future.

FireStickTricks.com can’t verify the type of content these apps carry. You may end up streaming unlicensed content on your TV and expose yourself to potential trouble.

The best way to avoid such a scenario is by using ExpressVPN on FireStick. It will help you protect your identity from local ISP providers and the government. You can follow the same steps to install ExpressVPN as shown in the above section. Or simply check this guide for step-by-step instructions.

Now check out the free streaming methods below.

1. Kodi – Install Kodi on FireStick and then install some sports addons.

3. Steaming Websites – You can use a browser such as Amazon Silk browser to access the free sports sites on this list.

4. IPTV – An IPTV service may be perfect for you. It is not completely free, but affordable for most out there.

Are you planning to make some bets on the Davis vs Cruz fight winner? Make some real money in the process by placing your bets on MyBookie.

You can visit that page and check current odds and numbers. Sign up for a MyBookie account and cheer for your favorite fighter.

Davis will be the crowd favorite this Sunday night. However, you shouldn’t dismiss Cruz based on his last five years’ performance. Who will dominate this one? Share your pick in the comments below.