You are here: Home / Sports Streaming / How to Watch Inoue vs. Donaire 2 on FireStick Without Cable

In this post, I will show you how to watch Naoya Inoue vs. Nonito Donaire fight on FireStick, Apple TV, Roku, Android TV, Samsung TV, Xbox, and mobile devices without cable. I will cover free, paid, and cheaper ways to stream the fight. Read till the to find every trick.

Note: Since Amazon FireStick is the most popular streaming device out there, I will keep the post focused on it. 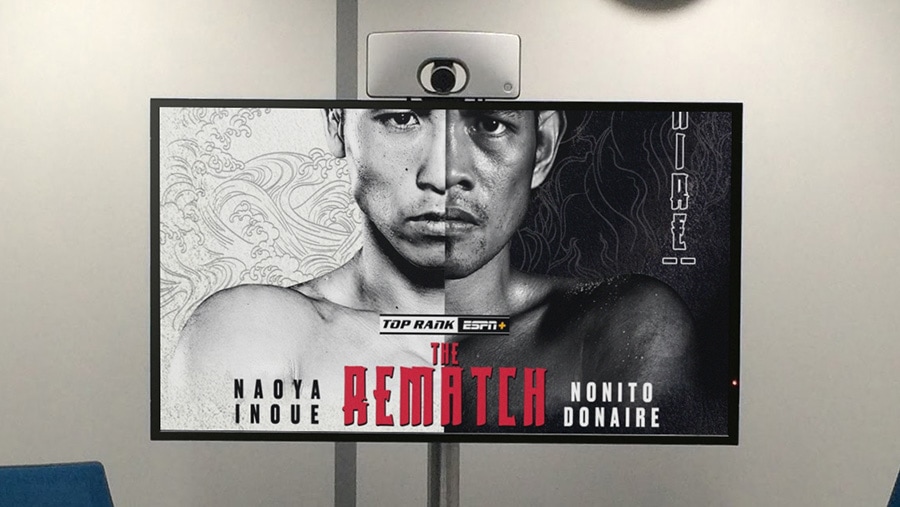 The stakes are all-time high with WBC, WBA, IBF, and The Ring bantamweight titles on line this Tuesday night. On June 7, we will witness who came away with Bantamweight gold from Saitama, Japan.

Naoya Inoue turned pro in 2012 and won WBC light-flyweight and the WBO junior-bantamweight titles in 2014. The fighter managed to defend WBO title seven times and acquired the WBA bantamweight title by beating Jamie MacDonnell in 2018. 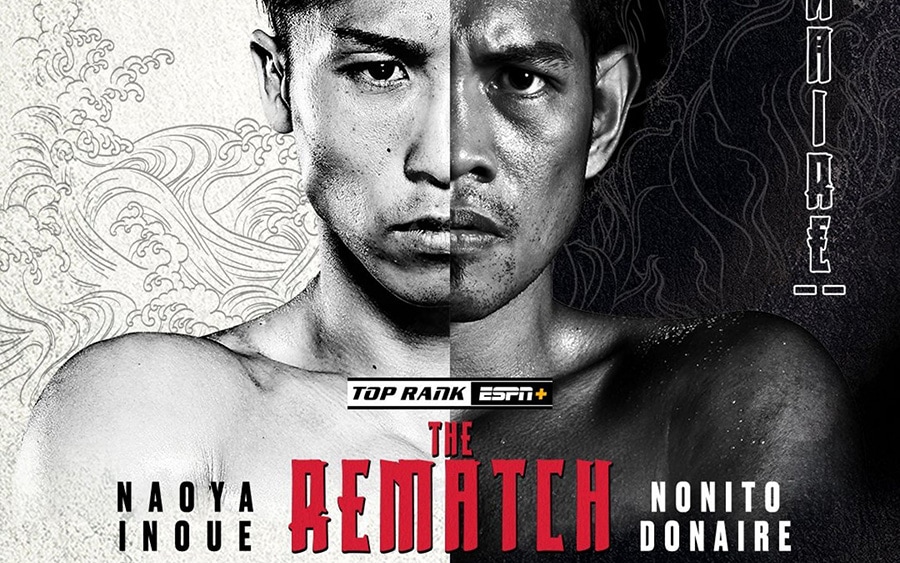 During the World Boxing Super Series bantamweight tournament, he beat the likes of Rodriguez, Donaire, and Jal Carlos Payano to win the tournament and won several titles like IBF, The Ring, and the WBA bantamweight titles. Since then, Inoue has successfully defended titles against Aran Dipaen, Dasmarinas, and Moloney. Can he repeat the same against Nonito Donaire? Let’s check his rival’s journey.

After making his debut in 2001 (at the age of 18), Donaire lost his second fight but went on to 30 straight consecutive wins in 12 years. He won a number of titles such as IBF and IBO flyweight titles, WBC and WBO bantamweight titles, WBO, IBF, and The Ring super bantamweight titles. Since 2018, his record has been somewhat average (6-3) and he might not start as a favorite against Inoue this Tuesday night.

The Inoue vs. Donaire is taking place at the same venue as the original bout. The Super Arena in Saitama, Japan is doing the host duties once again. Let’s check the date, day, time, and other details.

While the main card starts at 5:30 a.m ET, both the fighters will make an appearance after a couple of hours. Here’s everything we have on the Inoue vs. Donaire fight card.

Watch Inoue vs. Donaire on FireStick in the US

Inoue vs. Donaire is a part of Top Rank Boxing. As expected, Disney-owned ESPN+ has the streaming rights to air the fight in the US. You can either use the company’s ESPN+ streaming service or integrate the add-on with your existing Hulu plan to watch Inoue vs. Donaire online without cable. 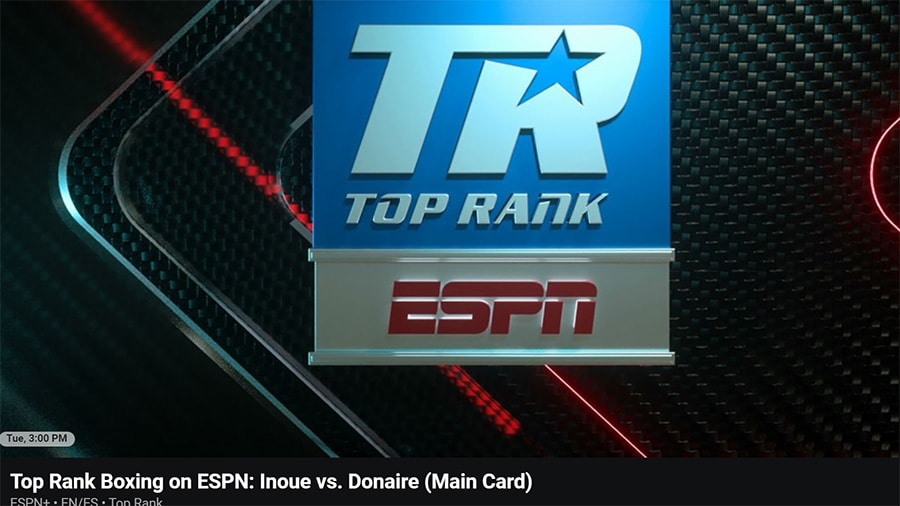 ESPN+ is home to several high-profile sports leagues in the US. You can watch NHL, MLB, NCAA Baseball, UFC, NBA, PGA, and more. You can also watch FIFA World Cup Qualifiers on it. The subscription is priced at $7 per month ($70 per year) and the price is easily justified with a rich sports library on offer. Get ESPN+ on FireStick using the link below.

If you are looking to cut the cord, you can go with Hulu’s highest plan Hulu + Live TV and to watch Inoue vs. Donaire 2 on it, you need to add ESPN+ and Disney+ to your plan. Both the add-ons are available with every Hulu plan. The final pricing depends on which Hulu plan you select in the first place. All plans do come with 50 hours of DVR storage and two simultaneous connections.

Stream Inoue vs. Donaire 2 on FireStick in the UK

None of the major sports networks in the UK has the streaming rights to air Inoue vs. Donaire 2 on FireStick. Instead, it’s Google’s YouTube that is going to live-stream the fight in the UK and Ireland. You can simply open the YouTube app on FireStick and search for Inoue vs. Donaire 2 without cable. If you are using other devices, you can follow this link and stream the fight online.

Live Stream Inoue vs. Donaire on FireStick in Japan

Amazon Prime Video is slowing getting into sports streaming around the world. The company is going to air the Inoue vs. Donaire fight on the Prime Video streaming service. You need to purchase a Prime Video subscription from Amazon to watch the fight online.

The subscription is priced at 500 yen per month or 4900 yen per year. It includes goodies such as a scheduled delivery on eligible purchases, Prime Video, Prime Music, Amazon Photos, and Prime Reading. Prime Video already comes pre-installed on all Fire TV lines of devices.

Watch Inoue vs. Donaire 2 on FireStick for Free

As you can see from the list above, YouTube is the only streaming platform airing the Inoue vs. Donaire 2 fight for free. However, the live coverage will be limited to the UK and Ireland only. You can’t simply use the link from another region and expect to watch the fight for free. Here’s where ExpressVPN comes in and saves the day.

Using ExpressVPN on FireStick, you can connect to the UK or Ireland server and open the same fight on YouTube to watch it. For YouTube, your virtual connection is in the UK or Ireland and it will make the fight available to your account. ExpressVPN advantages don’t end here, though. You can use the VPN service to comfortably access third-party apps on FireStick.

Once you have ExpressVPN installed on FireStick, you can securely stream Inoue vs. Donaire online for free using third-party apps. You may ask, why does one need to use ExpressVPN here?

The thing is, FireStickTricks can’t confirm the authority of these apps. Third-party apps aren’t available from the Amazon AppStore in the first place. That alone raises some concerns about their authority.

As a user, it’s quite difficult to differentiate between licensed and unlicensed content on FireStick. You can use ExpressVPN, modify your location and stay private while using such apps on FireStick. Get ExpressVPN for FireStick using the steps below and enjoy Inoue vs. Donaire for free.

Check my free sports apps list for FireStick and install two or three apps on your device to enjoy free streaming. You can also go with the Kodi app on FireStick and integrate third-party sports Kodi addons to enable sports coverage like Inoue vs. Donaire.

Open the Amazon Silk browser and start visiting the best sports streaming websites. Just don’t share any personal information with these websites. Some sources are filled with ads and trackers.

IPTV providers are getting popular among cord-cutters out there. You can get thousands of live TV channels, PPV content, and on-demand TV shows and movies for a small monthly price.

As expected, Inoue is starting as a favorite against Donaire. Check the live odds from the screenshot above and if you wish to place any bets, sign up for a MyBookie account and win healthy cash in return.

I think it’s fair to assume that this is Nonito Donaire’s last chance to shine. Can he win against Inoue? Share your thoughts in the comments below.