You are here: Home / Sports Streaming / How to Watch New York Giants Game Without Cable (2021)

Allow me to show you how to watch this Sunday’s exciting match between the New York Giants and the Philadelphia Eagles on your television set even without a cable connection.

It doesn’t matter whether you have Android TV, Roku, Apple TV, or FireStick as streaming devices for your viewing pleasure.  What matters is that you have the right device to enjoy watching the Philadelphia Eagles as they attempt to swoop over underdog but dangerous New York Giants.

I will focus more on FireStick in this article, but the services remain the same for all streaming devices.

As the 2021 National Football League (NFL) 2021 heads into Week 12, one of 11 matches to watch this Sunday is the game between the Philadelphia Eagles and the New York Giants. It promises to be an exciting contest, with the Eagles picked to snare a win against the struggling Giants.

And here’s how you can enjoy a front seat view of the Eagles vs. Giants match at home without cable.

It’s going to be an uphill battle for the Giants for sure, with the Eagles enjoying the momentum of a 5-6 win-loss slate against the Giants’ unimpressive 3-7 win-loss record.  The game will be held Sunday at the MetLife Stadium in East Rutherford, New Jersey, with NHL fans from nearby New York and Philadelphia expected to fill the stadium to the rafters.

Read: How to install and use the fastest VPN on FireStick

Read: How to install and use the fastest VPN on any streaming device 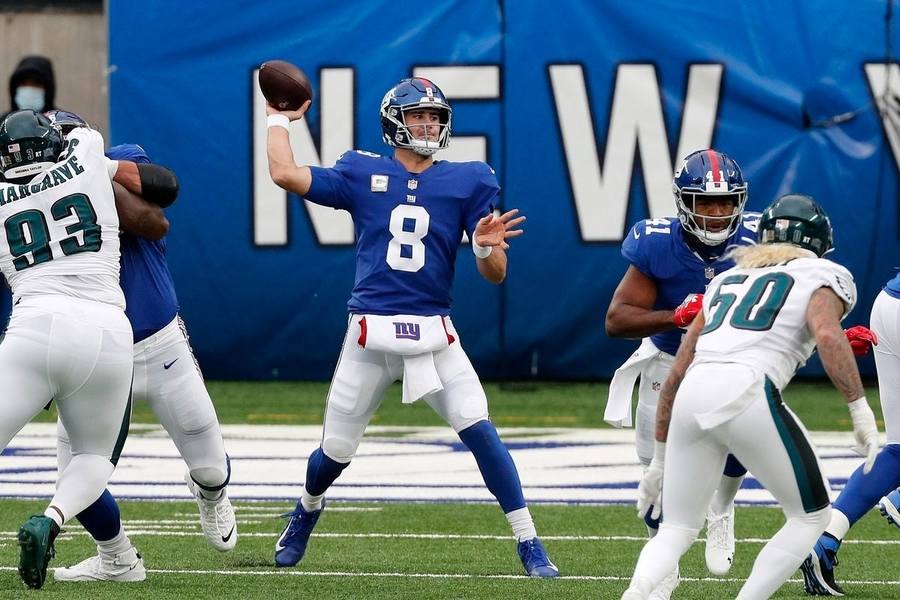 With home court advantage not clearly defined between the two neighboring states, all the other numbers seem to point to a victory for the Eagles.

The Eagles, with talented quarterback Jalen Hurts leading the way, nailed three consecutive wins in their last four games.  They had a dominant rushing attack in the last four weeks, resulting in wins over the Lions, Broncos, and Saints before they were zapped with a three-point loss to the Chargers.  They amassed 58 rushing first downs in four games, with Hurts contributing 20.

On the other hand, the Giants have been more pathetic than prolific after their recent 10-30 loss to the Tampa Bay Buccaneers.  They have had a measly 42 offensive touchdowns in 26 games, the lowest of any team since the start of the last season.  The loss to Tampa was the last straw for coach Joe Judge, who fired coordinator Jason Garrett Tuesday for his failure to create enough offensive space for its playmakers to score points and win games.

The Giants are heading to Sunday’s game without Garrett for the first time this season.  The void left by Garrett gives more reasons for sports experts to doubt the Giants’ chances to score a surprise against the Eagles.

The Giants and Eagles, which are both from East Coast, have a storied rivalry that began in 1933 with the founding of the Eagles.

The two teams have played in the same division in the National Football League every year since 1933, with the Eagles slightly ahead in the overall series with 89 wins and 87 losses.  They had drawn only twice.   Both teams have met in the playoff four times, with each team winning twice.

The intensity of the rivalry is not expected to level off despite the Eagles’ clear advantage over the Giants, with both teams expected to fight tooth and nail to score a victory and bragging rights over the other.   Busloads of fans from both sides are expected at the MetLife Stadium to support their respective teams.

The Giants vs. Eagles match is slated at 2 AM Sunday, with the actual game shown live on FOX. CBS and FOX divide all Sunday morning matches between them, with some of them, especially the major ones, being aired live.

The live game starts at 2 AM MST time on the FOX channel across the United States, except New Mexico, Texas, Oklahoma, Arkansas, and most areas in the East Coast.

I have a detailed guide on NFL streaming options.

Some of the popular options to stream Giants vs Eagles online include Sling TV, YouTube TV, Hulu Live, and FuboTV. Interestingly, all of these streaming services are downloadable on most operating systems, including Android, iOS, Android TV, Roku, Apple TV, and Amazon FireStick.

How to Watch Giants and Eagles for Free Without Cable

Note that fuboTV, YouTube TV, and Hulu are offering a free trial. You can sign up for any of the services and watch the Giants and Eagles game at no cost.

The trick is to register an unused email address and cancel the subscription before the free trial ends.

But if you don’t want the hassle of availing of free trials, below are some unofficial ways to stream Giants vs Eagles.

However, I would never risk my privacy while streaming with unofficial free streaming options. I recommend you to invest in a reliable VPN service before setting up free or low-cost streaming services on your device.

Here’s how to set up ExpressVPN on FireStick:

Now that your internet connection is powered by ExpressVPN, here’s how you can watch Giants vs Eagles for free.

There are hundreds of free sports apps, but I have curated the most popular ones for you. Check out my list here and you are ready to stream NFL for free.

Another option to watch the Giants and Eagles match is Kodi. Simply install the Kodi app on your FireStick, integrate the right sports addons, and that’s it.

For the users who don’t want to go through setting up applications and Kodi addons, sports streaming sites are the way to go. You can use the Amazon Silk browser on your FireStick and visit any of the sports sites from this list.

Although the Eagles are the odds-on favorite to win, the Giants are expected to deny their archrivals a simple walk in the park.  “They just might make it if the Eagles take them for granted,” odds makers say.   After all, at stake in the contest is not just another win, but pride, lots of it.